November 6th 2013 saw the 25th anniversary of the beginning of Cosby Quilters.
However, for a few of us, our journey into stitch began several years before.
A small group gathered once a week to sew in Joan Smith,s house.    The fabrics we buy today were certainly not available, and so we used remnants left over from dress making, and or, items bought from jumble sales.  All carefully washed and un-picked.  Joan would sometimes bring 'treasures'
from unknown sources.
We once had a trip to Lincoln to an outlet which sold bags of offcuts from 'Diary of a Country Lady' (I think it was M & S current bedding fabric).  The lady in the shop was so overwhelmed by us all, that she threw the bags outside for us to 'fight over'.
The lovely thing about this time was that if you said, 'I would like to  make a quilt in autumn colours' everyone gave you some of their limited stash.
I have a very worn quilt with fabric made from pieces given to me, and it has lovely memories of those who gave me these pieces.  This was true patchwork to me.
I could relate many tales of exploits from this time, but had better move on...
Following our 1st Quilting exhibition in Cosby House, so many people wanted to join our group, and proved to be too many for Joan's home.  So, we moved to the Church Hall, and Cosby Quilters was 'born'.
Out 25th anniversary evening was opened by Anne-Marie who read a card from Joan, who sadly was unable to attend.  A poem was also read out, which had been given to Joan after our first Cosby Quilters Meeting.
There were 56 people present on this special evening, and how lovely it was to see some of the original members, who had been invited to come along and join us.
A well deserved thanks was given to Jean Waterfield, one of the very first to join Joan's group, and who has been on the Committee since the Quilters began.  Jean also usually hosts meetings at her home, and we were happy to present her with a planter of flowers, and also to make her an  honorary member.
After the presentation we enjoyed tea, and  beautifully iced cakes made by Kathy Francis.
The Back room had been adorned by a long string of bunting, and each piece had been signed by current members, and stitched together by Jean.
We were able to recall many events as Jean had produced a montage of photographs taken over the years, and much 'Wow, don't we look young; and who's that; and oh look, there's so and so'.... could be heard.
The evening was rounded off with a raffle.
I would personally like to thank Joan and I think I speak for many of us when I say, 'You have introduced me to a wonderful hobby, which has enriched my life in many ways, and through which, over the years, I have made many really good friends'.
Joan, We all wish you a speedy recovery
Here's to the next 25 years of happy stitching. 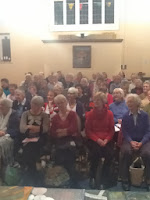 The speaker was very good, and
this is obviously a very interesting
subject!!

Not only does Kathy Francis
sew, but she makes beautiful
cakes