Business at the AGM on Wednesday 6th February was speedily and efficiently covered and we welcome a new member, Anne Cope, to our committee.

Our Speaker, David Lee, was able to give us so much information on his topic "Patterns of Life in Amish Quilts".

Judging by the unusually high number of questions he was asked at the end of the talk it was a subject that captured the interest of the audience who wanted to know more.  Lots of Amish quilts, both modern and early 20th century were shown and the relevance of their patterns and colours explained.

As well as this we were given an insight into the Amish philosophy and way of life which was fascinating.

Quilts formed, and are still forming, an important part of Amish women's lives from the utilitarian, social and now sometimes economic aspects of their society.  Examples of this work are highly prized and exhibited. 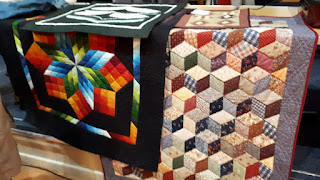 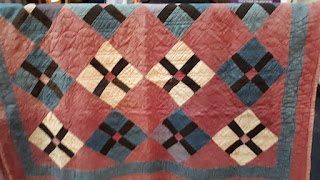 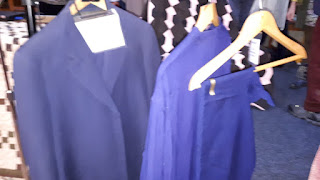 Examples of Amish Clothing made of very fine wool 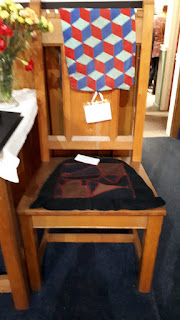 The Amish generally do not have decoration in their houses.  The pieces shown on the chair would be used on their bent wood rocking chairs one of the few things that would have been decorated.